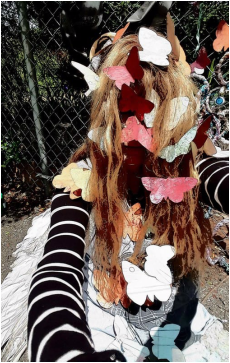 Melissa spent her formative years growing up on the island of Cyprus surrounded by the luscious Mediterranean landscape filled with pink flamingos, African migratory birds, olive trees and wild flowers.
Greek mythology still pervaded the ancient culture. These were major influences that carried over into her work as sources of inspiration. Her love of the natural world, its innate beauty and ability to adapt and transform external influences in creative ways and how we connect with it through story has found diverse expressions in her artworks.
Since her return to the Northwest she has been involved with Native American culture and is influenced by their connection to nature expressed in native art, stories and way of life. Combined with her concern about how human habitation impacts the earth Melissa has pursued this in her artwork using these influences as vehicles that bring us to a greater awareness and understanding of the need for a more balanced relationship with the natural living world.

This year in response to the Covid-19 pandemic Melissa and her daughter Alice Springs launched a wearable art collection featuring face masks as a way to help people stay healthier and uplift people with wearable art during these hard times.
You can see their collections here, https://melimask.com/
Melissa and her daughter have also been co-teaching art online to children from local communities as well as immigrant and refugee families thanks to grants from 4 Culture and WIAC.

Much of Melissa's work is collaborative with many public art installations and art exhibitions focused environmental and social justice including issues around abrupt climate change, endangered species and the impact single use items are having on the earth.

Earlier this year Melissa completed a large public art commission for the Modera First Hill housing development. This project addressed gentrification with her art incorporating the voices of the community. In this project Melissa invited the collaboration of the performer/song writer/director, Isiah Anderson Jr.

Some projects from the past.
Melissa received an Artist Trust GAP grant in 2016 for her project Winged Migrations #1 ;an interactive project with honey bees and a Whidbey Island Arts Council Fall Visual Artist Grant for her project 'A Place To Dream'. She had a solo show at Museo Gallery in Langley in October of 2016 and received two public art awards summer of 2016 for Put Art In Parks and Art Interruptions funded through the Office of Arts and Culture, Seattle Parks Department and Seattle Department of Transportation and a shop front installation for Lake City Future First. Her installation 'The Story Of Water' was featured at the beginning of 2016 at The Whidbey Institute for their conference on- water as an endangered resource. Her work was exhibited at two COCA ( Center On Contemporary Art) shows at The Columbia Winery and the Fisher Pavilion.
Melissa ran a number of community engagement workshops in 2016 with immigrant and refugee families and children in conjunction with her public art commissions, worked as an artist in residence at Fremont Community School creating art experiences for
pre -school children and taught art to elders at a retirement home in North Seattle creating opportunities for them to discover their inner artist.

She is closing out the year with several other public art installations including art wrapped signal boxes in Kent, https://www.ilovekent.net/2020/09/16/have-you-seen-the-new-art-wrapped-traffic-signal-control-boxes-around-kent/
and a collaborative Holiday tree installation called 'Sustainability Is In The Trees' with artist friend Gillian Theis. Presented in Whale Park, their installation showcases an abundance of ornaments created with non-recyclable trash, raising awareness of the microplastics in the sea and reminding us of our responsibility to address the climate emergency before it is too late.
​
Melissa is currently represented by the Seattle Art Museum Gallery and Museo Gallery in Langley, WA.